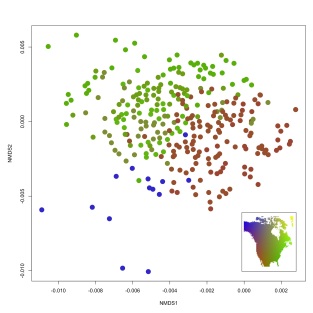 Two of the plots that I had been studying as part of my continental ectomycorrhizal spore bank survey burned in the California Rim Fire. I used this opportunity to study ectomycorrhizal fungal recovery and succession after catastrophic wildfires. In particular, I am interested if there are certain “fire fungi” that are adapted to recovery after wildfires, analogous to the concept of serotiny in plants. Read about my results in ISME J  or check out the links to the articles and radio interviews about this research.

Using a system of isolated tree ‘islands’ in Yosemite National Park, I have been studying the drivers of ectomycorrhizal fungal richness and beta-diversity. I am interested in investigating whether ecological theories developed for macroorganisms apply to microorganisms, and I am interested in understanding the drivers of fungal diversity. The results from my research applying island biogeography theory to ectomycorrhizal fungi are published in Ecosphere. The results from my research finding that pH and organic matter more strongly structure fungal and ectomycorrhizal communities at fine spatial scales are published in Molecular Ecology.

The invasive pathogen Phytophthora ramorum causes the disease Sudden Oak Death and has killed 1 million trees in California. Sudden Oak Death kills tanoak, which is the major ectomycorrhizal fungal host in redwood tanoak forests.In collaboration with the Rizzo lab at UC Davis, I have been sampling soil fungi and studying the effects of this disease on soil fungal communities in coastal California redwood tanoak forests.

Bacterial and fungal Decomposers along an Elevational Gradient

Microbes are key drivers of leaf litter decomposition, yet our understanding of their diversity and mechanisms remains in its infancy. Furthermore, it is unknown how microbes are affected by climatic gradients such as temperature and precipitation, and thus how they might be affected by climate change. In collaboration with the Martiny lab at UC Irvine, I am surveying 16S bacterial and ITS2 fungal communities decomposing leaf litter along an elevation gradient in southern California. Read about my results in PNAS.  I am also sequencing genomes of nearly 40 leaf litter decomposing bacteria and assessing their decomposition abilities with laboratory cultures to investigate evolutionary trade-offs in abilities to degrade simple and complex forms of carbon.

In collaboration with Rodd Kelsey and Ed Smith

at the Nature Conservancy, I am working on understanding how forestry and fires affect ectomycorrhizal fungi and forest regeneration. We are sampling soil from 29,000+ acres of land near the French Meadows Reservoir in the Sierra Nevada Mountain Range that are actively undergoing various forestry practices and prescribed burns to determine how these practices affect fungi, what constitutes a healthy ectomycorrhizal fungal community, and how can we manage forests for fungi.

Fungal and bacterial succession and ecosystem regeneration in California Chaparral

In Aug-Sept 2018 the Holy Fire burned 23,000+ acres of Chaparral in Orange and Riverside Counties in southern California. 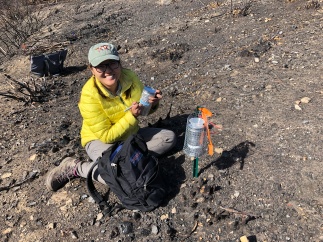 We were able to get in within 1 week of the fire to sample soil for bacterial and fungal communities and biogeochemistry. We have been sampling monthly for the first 6 months to examine how changes in microbial succession mediate ecosystem regeneration after the fire. We are collaborating with botanist Loralee Larios and biogeochemists Pete Homyak and Cassandra Zalman to link post-fire changes in soil microbial communities to plant regeneration and nutrient cycling.

We are examining how distance from unburned edge, time, and ash quantity affect fungal and bacterial

community composition and abundance after a prescribed fire in the Santa Rosa Plateau Ecological Reserve. In collaboration with botanist Loralee Larios we are linking changes in arbuscular mycorrhizal fungal communities and spore abundance with post-fire plant succession in an annual California grassland.